Davidoff Echo, an aftershave for men was originally an impulsive purchase by yours truly when firmly in the mindset that spending $35 for a 100ml bottle wasn't too much if it was nasty once I got my sniffing tackle around it. If you want to buy a bottle after reading this, then you can for under £20 from places like Fragrance Direct. Before you rush over to buy a bottle, read on.....
The first thing that attracted me to this on the shelf was the stylish bottle, it has to be the funkiest aftershave bottle. Made from clear glass it is more of a sculpture than a bottle. On deeper research it comes to light that a designer was commissioned to actually make the bottle! A bit over the top for an aftershave, but a nice touch all the same. A work of art? No? 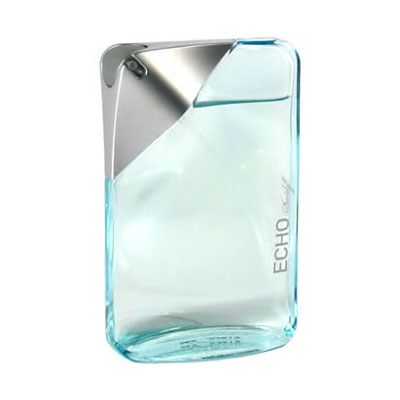 To this day I've never seen Echo advertised in the UK so you really have to do some digging to find the marketing blurb, or as I shall now call it 'garbage':

'Dynamic, cool and masculine Echo is an urban trendsetter'

The notes to Echo build it up as an airy innovative fragrance that contains:
Head: Suede, musk, liquid air.

From reading the notes I would be inclined to think from the notes that the fragrance would be very dry and heavy on the nose and the combination of suede, musk and sandalwood would make this strong providing a very hard wearing masculine fragrance.
Actually applying the fragrance is a bit tricky due to the size and shape of the bottle. The smooth ridged glass combined with wet hands is not an option and I found that I had to use two hands. One to hold the bottle and the second hand to actually press the atomiser! The first thing to strike me was that large amounts of the aftershave are dispensed with one press of the atomiser, meaning that three squirts are more than enough.

My initial thoughts about this fragrance were correct, heavy suede with a warm musk was the first smell to strike me and it was far from cool. After shaving this stings, it stings a lot and in my case inflamed the area around my neck when I applied it after shaving. I am not a big fan of heavy fragrances and as such I wasn't happy when I first applied this, but to its credit, the head notes do fade very quickly, however the woody and spicy notes are equally as strong as the head notes and again, these seem far too heavy on the nose.
Thankfully within 10 minutes of application the head and heart notes do become lighter and less evident, however there remains a warm, woody spicy fragrance and the dry down notes to me were at no time evident. This doesn't mean that they weren't lingering though. An hour after applying Echo my better half would not come within 50 yards of me, due to the "awful pepper smell".

In the interests of seeing if the fragrance altered over time, and indeed how long it would last I persevered - I even tried changing my moisturiser, tried it with a beard, tried it shaved all to no avail. Unfortunately the fragrance does not calm down.
Overall, I was drawn in by the cool bottle and cheap price but was left disappointed by the heavy fragrance. To this day Echo sits on the shelf in the bathroom and is never used. Although some people would like this sort of fragrance (Davidoff themselves do say that it is for a more mature audience - that rules me right out).

I personally prefer light fragrances that have a citrus base and personally would never ever buy this for myself or as a gift for others. It simply is not refreshing enough and lacks that certain something that would make people stand back and say "wow, that smells lovely".

Davidoff Echo in my opinion would appeal to those who like Christian Dior Fahrenheit, Polo by Ralph Lauren and Diesel Zero Plus. I could also only see it suitable for daywear due to the heavy nature of the fragrance.
If you like your fragrances to be light, citrus based and easy on the nose you should avoid this at all costs.