I’ve been writing this blog for over eighteen months and it has seen a wide variety of beauty and grooming products reviewed, which included a large number from Ted Baker’s Grooming Room. So when I was asked if I would like to go and try out one of their legendary salons I couldn’t wait, and asked if there was anything they could do with my hair, eyebrow (I say eyebrow as I’ve had a mono-brow for about thirty five years) and beard. 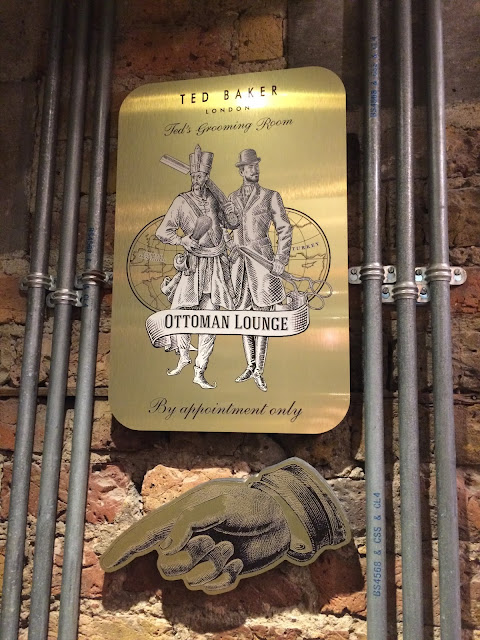 After being booked in for ‘the works’ it was simply a case of turning up – in my case in particular I opted to go along to the shop tucked away in Holborn on Theobald's Road, it being just a twenty minute walk from my office. You can see a full list of their locations, plus their new premises on Commercial Street here.

Upon arrival I thought I’d got the wrong place – while looking effortlessly cool with a number of barber’s chairs and a hive of activity I wondered where the luxurious experience was going to take place. After giving my name my photographer in chief (aka beautyqueenuk) and I were guided downstairs into a cool, and rather open area. 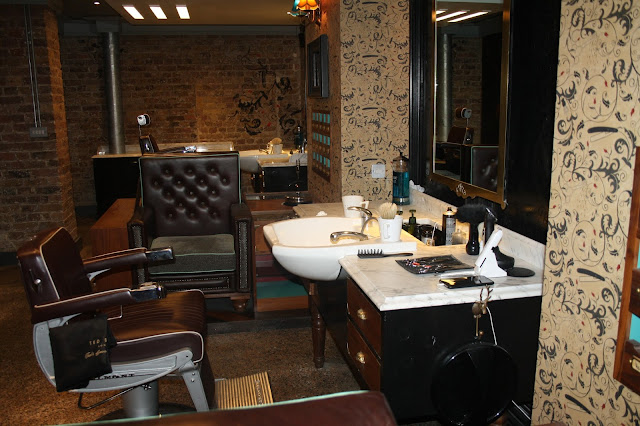 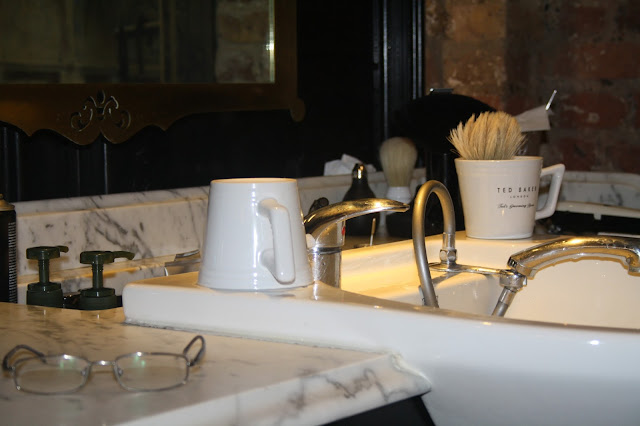 After being offered a complimentary cocktail (I declined wanting to keep a clear head) the other half jumped at the chance and after trying it I really wished I’d gone for one – it had rich flavour and a kick like a mule! Anyhow, we weren’t there to get sloshed, we were there to sort out my face….. 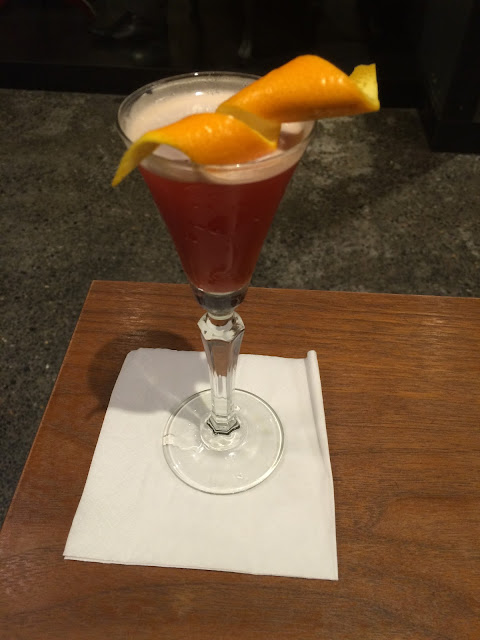 ‘T’, my barber for the evening was given carte blanche to do whatever he wanted to my hair, but the sad fact was that it was actually too short to do anything drastic to the style and as I have quite straight hair we settled on a much shorter style than usual, down to the bone at the back and sides with a very short messy top – a sort of cross between bed head and spikes. What struck me first was that rather than reach for the clippers to shave around the back and sides everything was done using scissors and the look of concentration was intense as the scissors snipped away. Clearly a man with symmetry on his mind, T really knows his craft and within thirty minutes my hair looked perfect – I was delighted, but this was just the start of my happy surprises. 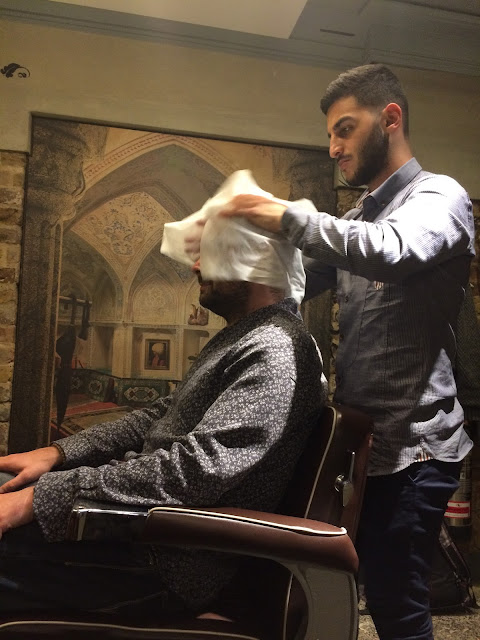 The moment I had been dreading arrived – the treading of the brow (yes, dreading the threading)! Christ it hurt and I could hear a light cackle coming from the direction of the missus (who was filming at this point). It actually wasn’t that bad, the worst part was when T uttered the words “so you did want them looking feminine?” and my heart stopped! He was joking and within a minute my brows has been separated and shaped without completely altering how I looked. Nice, neat and tidy and something I will have done again. 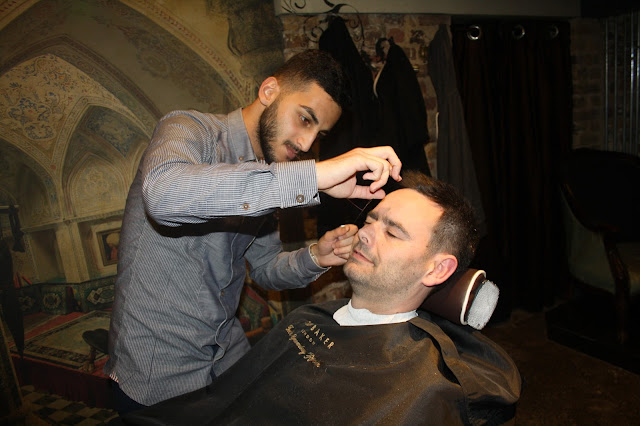 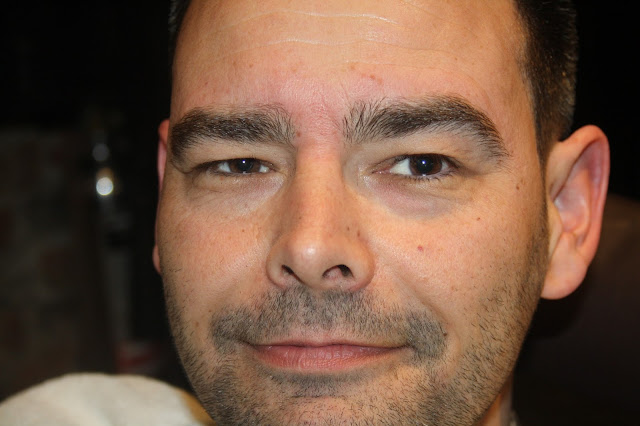 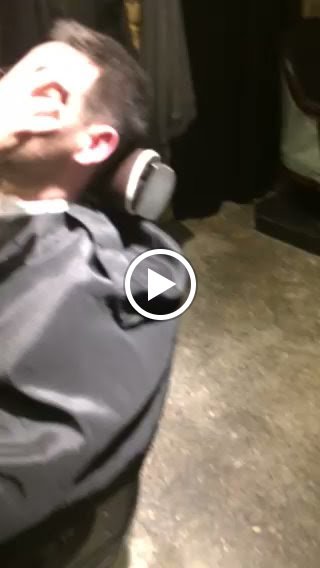 After the brows (it still seems weird talking about them in plural) came the beard – I opted for a trim rather than cut throat shave and this was done without incident, the beard being trimmed and shaped properly (for the first time ever). This followed with the hairs in my ear being burnt away. I admit seeing a flame getting so close to my face had me getting a little bit nervous but it was painless and the inside of my ears are now incredibly smooth (like you needed to know that!) 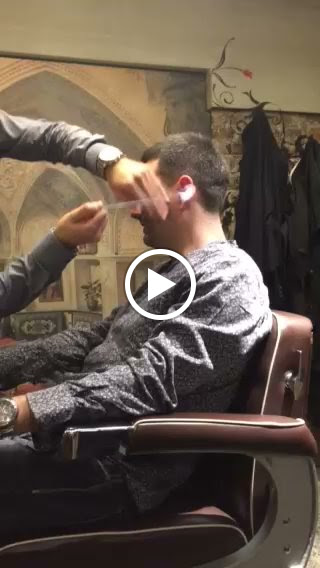 Finally, and this really sealed the deal for me – for months I’ve had a trapped nerve in my elbow which has caused mild numbness in my left hand. Step forward T with the most relaxing massage – a hot towel was placed over my face which nearly sent me off to sleep and then crack! I have no idea what he did to my arm but ever since the numbness has gone and I feel like a new man! Awesome!

The full treatment would have cost £75 and I have to say, just the massage alone and removal of the pain in my elbow makes this worth it. Add in the fact that my hair looked and still does look neat and tidy with a nice twist on my usual style and you have a winner here. It’s strange having two eyebrows, and I’m sure they will take time to maintain but I think the whole package has improved how I look, which ultimately is the point of such obsessive grooming!

I have nothing but praise for T and the folk at Ted’s Grooming Room – it was an experience I’ll never forget and I will be back again in a few weeks when my hair and brows need doing again. This may have been provided gratis but I wouldn’t hesitate to stick my hand in my pocket and pay for this myself.

FORGET THE REST, TRY THE BEST

You can see the full list of treatments available here.
You can read more of my reviews of the Ted’s Grooming Room range by following the links below: