When I started writing this blog back in January 2014 I had what I considered a bit of an over the top grooming routine to try and hold back the ravages of time (and alcohol and cigarettes). The use of a shampoo and conditioner was a given, but from time to time face scrub, moisturiser and more care in the shaving stakes formed a routine that took minutes each day. Fast forward to today and it takes bloody ages…and that’s without all the face masks I keep slapping on!

So, what has been part of my grooming routine over the last few weeks? 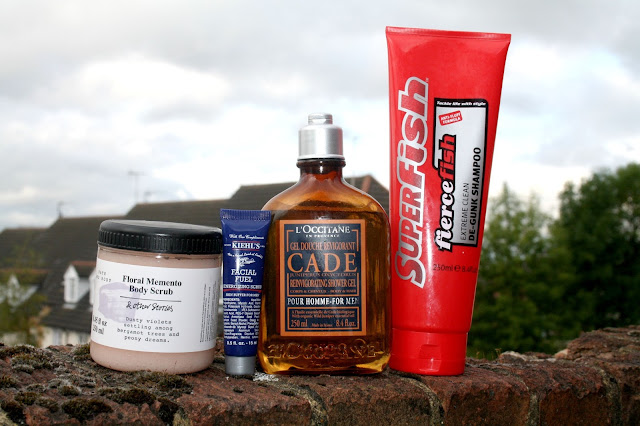 Take two bottles into the shower (remember that advert folks?), not me, I take a bag full!

With all of the gunk that I add to my hair, particularly recently with the longer locks I do need something to strip it out before styling again. In the past I’ve been a fan of and written about Osmo Detoxifying Shampoo as a way of removing residue from waxes, gels and clays, but step aside…..I now have…..

A 250ml tube of this costs just £3.99 here. It promises to cleanse and remove product build up without leaving hair looking fluffy. Now I like this, it has a lovely fresh aroma that starts to wake me up in the shower, lathers up brilliantly and doesn’t morph into some chemical nightmare. That to me is a massive plus, but here it is, it actually does remove even the most stubborn hair product and does so without the need to endlessly massage your scalp and the strands of hair.

If you haven’t tried it, you really should and soon.

Then it’s onto the face and prior to shaving I either use the awesome Face Scrub from Cornerstone (it’s soooo cool) to open up the pores on my face or alternatively….

This has a delicious citrus aroma and the scrub itself has the same properties as an orbital sander - the grains really do smash the dead and dry skin from your face as it removes any hints of dirt that can build up. As the grains are really abrasive little effort is required (always a bonus in my book) and as soon as it is rinsed off my face always feel so much cleaner, smoother and soft to the touch. Maybe its all in my head (a lot of stuff is) but it I swear using just this knocks years off me.

The entire Cade range is fantastic - the aftershave is actually one I’ve written about before and is actually a good one for daywear. The shower gel however is a deep woody number that banishes body odour and lasts for ages. The fragrance of bergamot blended with juniper really does pack a punch and screams “I am rugged man”.

At £14 for a 250ml tube of Cade this it does class it as expensive but a little goes a long way and it does last for ages (well over two months). If you haven’t smelt or tried this yet then why not? 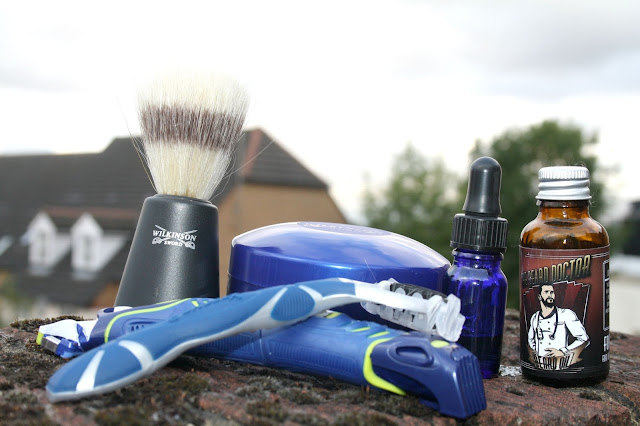 At £9.99 for 30ml this is quite reasonable and I’ve included it here as without this my shaving experience would probably be more brutal than normal. This is what they say about Forest Fuel over at the Beard Doctor site:

‘The Beard Doctors signature scent; Forest Fuel Beard oil conditions and nourishes the hair with vitamins. This promotes further hair growth. Forest Fuel will soften your facial hair which prevents irritation, beard itch and beard dandruff. The oils used in our formula are the closest match to oils that your skin naturally produces.

As my beard grows I do suffer with that dreaded itch on my face - this does soften the bristles and I find that shaving after using (and once full beardage has been achieved and I’ve got bored of it) is a breeze, it also has a cracker fragrance to it and when they say it oozes alpha male they aren’t kidding. The blend of sweet almond, jojoba, cedar wood and pine really do gives this an earthy feel as soon as it wafts up the nostrils. That said, it isn’t actually that overpowering and doesn’t seem to interfere with aftershaves or colognes that are applied afterwards.

Got a beard? Grab yourself a bottle of this beauty here.

After spending twenty years using gels and foams I’ve really gotten into using the old school brushes now and shaving soap. The shaving soap from Wilkinson Sword however is ridiculously affordable and a 125g bowl of the soap is just £2.29. The brush however will set you back £4.29.

The brush is actually much smaller than the other two that I have but I prefer this, it makes applying the soap far more precise and even when too much pressure is applied you don’t find rogue soap in your hair/ears/eyes because of long bristles. Good call designer type R & D people….

I really like the soap - it could be rubbish (it isn’t) but for me the fragrance is the clincher - it reminds me of my late grandfather. Don’t ask me why but it does and I can’t for the life of me put my finger on what it is. It is clean and fresh, subtle yet strong enough to leave just a hint on the skin for a good half an hour after shaving. In terms of how it helps with shaving, well it lathers up with minimal water, creates a good consistency and doesn’t clog razor blades which cuts down on actual shaving time.

Well worth a punt.

I was in two minds whether to try this razor, I’ve been really enjoying using a safety razor recently but thought what the hell. I haven’t used a Wilkinson Sword razor since I was about twenty and their ‘safety’ disposable razor resulted in me slashing my face to bits. Boy they have come on a bit and this new offering is actually a good razor - with as the name suggests five blades. On top of this, it also has a built in trimmer for those sideburns and beard.

The trimmer is perfectly sized and after having my hair cut at the weekend I used it to square off my beard with my sideburns and I was pleased with the results.

At £14.99 for the shaft and one blade and with a four blade refill pack costing £9.99 it’s a on par with other similar products and thankfully for my wallet I still have some RazorBrite solution left that makes my blades last even longer.

The razor slices without dicing and as you would expect delivers a cool and clean shave. You won’t get that cut-throat razor shave feel but you won’t in my view with any razor like this on the market so you really can’t knock it for that.

BEFORE LEAVING THE HOUSE 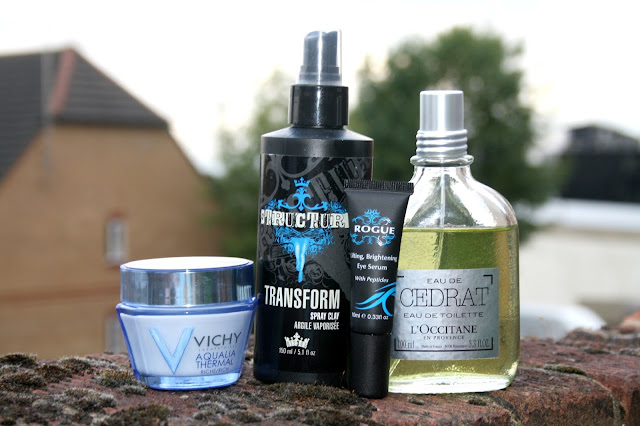 I’m all about the face contouring……erm…..not…..but I do now apply all sorts of lotions and potions. For the last week or so I have been using….

This came into my collection of lotions and potions after the other half attended a blogger event. It’s not a brand I had heard or, cared for or would be likely to just pick up but I have to say it does have a lot going for it. You can pick up a tub for under £20 and it promises to provide continuous hydration, for up to 48 hours intense comfort and protection against daily aggressions.

It won’t stop a vicious mugger outside King’s Cross station on a dark December night but it does pack the skin with hydration and personally my skin looks revitalised after applying this. The dry patches of skin at my hairline were gone in a matter of hours and when looking in the mirror I think I look better at the end of the day so it does seem to keep on hydrating without leaving any greasy residue.

I have written about this before and it is still managing to hold back the years - it reduces the bags under my eyes, rivalled only by another brand I will be writing about soon (one to look forward to). Fine lines and blemishes are kicked well and truly into the long grass and that makes this one to definitely look out for if you suffer with dark or patchy eyes.

You can read the full write up here.

I will be writing a full analysis of this beautiful fragrance from L’Occitane soon. In the meantime my first impressions! This is summer in a bottle, so light, fresh and packed with citrus it is perfect for long summer days and would work for daywear and those special occasions.

This is what they say about the EDT over at the L’Occitane website:

‘The first impression of Cedrat Eau de Toilette is a cascade of freshness: a green, citrusy, joyful, sparkling scent. Then, very quickly, the undeniably delicate nature of the fragrance is revealed through the bitterness of the woody rind. Fine and distinguished, cedrat asserts its innate elegance, which blends harmoniously with that of bergamot. Aromatic spices and a slightly smoky, woody base enhance the overall impression of sophistication.’

I’m inclined to agree with that analysis to a point but actually I don’t think it dries down that much from the initial fresh citrus blast, but for me that is no problem, I love it. The absence of a woody base makes this a rival to a fair number of far more expensive aftershaves that have similar compositions.

Clay? In a sparay? It'll never catch on......or will it? Well this has been keeping my locks firmly in places for weeks now. Even when my hair was really long this kept each strand in place, but it is short styles where this comes into its own.

With spikes about two to three inches in length this is exceptional. After drying my hair it is simply a case of three sprays and then running my palm through my hair and it's done. No faffing, the spikes look choppy and they hold in an instant, the spray drying so quickly you really do have to act fast.

You can pick this up for around £7 for a 150ml tube and it is worth every penny.

I have written about Structure hair styling products before here and I'm yet to be disappointed. No residue, no mess, just a style that will stay in place for well over ten hours.

So there you go, it’s National Grooming Day today, hence why I’ve decided to share my current routine. It goes without saying that I wouldn’t still be using these products if they were a bit rubbish but actually each one surprised me, particularly the Wilkinson Sword Shaving Soap.

Both the actual grooming and the products themselves! 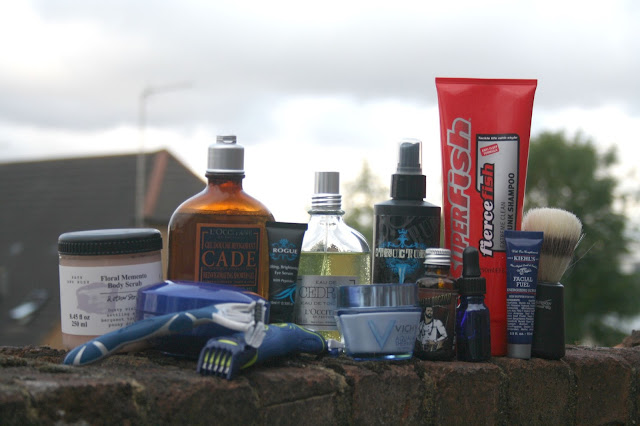